They were restricted many times from casting their vote starting from the day before the polling,” Sarkar alleged. 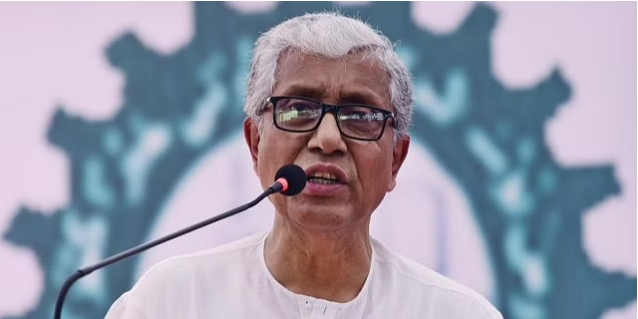 Agartala: Calling upon the people to unite against the ruling BJP for addressing peoples’ issues and anti-democratic activities of the Tripura government, veteran communist leaders and leader of opposition Manik Sarkar alleged the ruling party set an instance by ‘looting votes’ in just concluded by-elections to the four assembly constituencies.

Despite all odds and falling prey to the BJP’s terror, a major section of people managed to cast their vote in this by-election. They were restricted many times from casting their vote starting from the day before the polling,” Sarkar alleged.

“When the BJP could realize that people of this state are getting detached from the government and the party, they had to change the face of the Chief Minister, but then nothing changed and people’s distrust against BJP remained the same,” he observed.

Chief Minister Dr. Manik Saha won the poll from the seat against the opposition in the by-election by massive poll ragging, obstructing the voters except those belonging to the BJP party and making the entire voting process turn into a farce like all previous elections including the LokSabha poll.

Sarkar advised his party cadres to start activities in their respective areas with the common people and motivate the people to resist the terror mongers and vote snatchers in the coming election and added, “If BJP again comes to power Tripura will be ruined and its economy and culture would not able to stand back.”