IndiGo felicitated for Women Empowerment in Aviation & Aerospace by IWPA 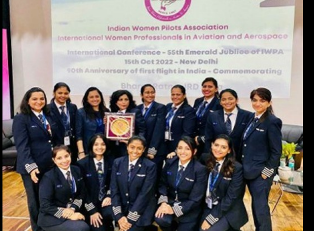 IndiGo boasts the highest number of women pilots employed by any airline in the World. IWPA acknowledged the airline’s efforts toward creating a more inclusive and gender-diverse work culture by employing over 680 women pilots and setting an example for the world to see.

Capt. Ashim Mittra, Senior Vice-President: of Flight Operations, at IndiGo, said, “We are extremely grateful to IWPA for recognizing IndiGo’s efforts towards women empowerment. At IndiGo, we are incredibly proud of being an equal opportunity employer and always strive to create a culture that embodies inclusivity and diversity in all our practices. India tops the list with 12.4%, twice the global average of women pilots in the world. This award motivates us to aim even higher to witness an even better inclusive work culture that will serve as an example for the aviation industry across the globe.”

Indian Women Pilot Association (IWPA) keeps its doors open not only to active women flyers but also to those who, due to one reason or another, have discontinued flying and to keep alive their interest in aviation. The Association acts as a medium also between women wishing to take up flying and the authorities concerned with aviation.