Drone technology has proved to be a force multiplier in military operations as evident from its application in various recent conflicts across the world. 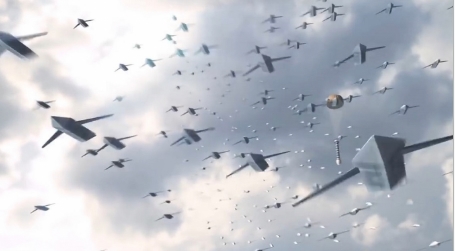 New Delhi: The Indian Army is all set to use drones in the modern warfare ecosystem. The swarm drone system has now been inducted into the mechanised forces to provide an edge in meeting future security challenges.

“To induct this niche technology, the Army has procured swarm drones from two Indian startup companies. In addition, the Army has also initiated a Make-II case, Autonomous Surveillance and Armed Drone Swarm (A-SADS) which includes a number of improvements and also a version for High Altitude Area,” sources in the defence establishment said.

Swarm drones consist of a number of drones controlled from the same station and can carry a variety of payloads in a single mission, thus capable of overwhelming enemy defences by undertaking collaborative attacks.

“Recent incidents along our northern borders and the adverse relations with our western and northern neighbours necessitates induction of swarm drones providing tactical commanders with a force multiplier capable of providing surveillance inputs, undertaking close recce of a particular area to confirm inputs received from other resources and engage varied targets,” a top source said.

Further, the sources said that the application of swarm drones in various recent conflicts across the world especially in Armenia, Azerbaijan, Syria and the strike on oilfields in Saudi Arabia and the Russia-Ukraine conflict clearly highlighted the potency of this niche technology.

“A group of drones operating in conjunction with the ground manoeuvre forces will provide an aerial manoeuvre capability during both offensive and defensive operations, thereby enhancing the combat potential of the ground forces,” they added.

Drone technology has proved to be a force multiplier in military operations as evident from its application in various recent conflicts across the world.
The recent incidents along the Indian borders have seen a noticeable increase in drone-related incidents along the northern and western borders, a top defence source said.

These drones can be employed in both offensive and defensive operations providing a decisive edge to the tactical commanders employing them.
The swarm drone system consists of a number of aerial vehicles which are Artificial Intelligence enabled and capable of communicating with the control station as well as among themselves.

Artificial Intelligence-based Swarming algorithms enable the swarm drones to automatically distribute the tasks among themselves, navigate to the area of interest, ensure collision avoidance during movement to the target area and carry out a search of the area.

The Artificial Intelligence-based Automatic Target Recognition (ATR) feature enables the drones to automatically recognise targets like tanks guns gum, vehicles and humans and display them on the control station screen thus minimising the chances of the operator missing any target and also facilitating engagement by a suitable type of weapon platform.

Artificial Intelligence based Automatic Target Recognition (ATR) feature enables the drones to automatically recognise targets like tanks guns gum, vehicles and humans and display it on the control station screen thus minimising chances of the operator missing any target and also facilitating engagement by suitable type of weapon platform.