Meanwhile, the river Krishna is also in spate due to heavy inflows from the upper catchment areas. 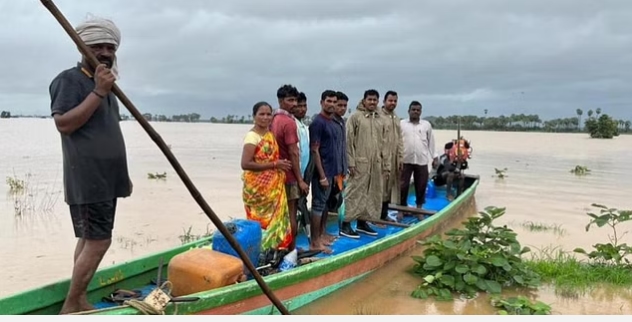 Vijayawada: The Godavari and Krishna rivers were in spate due to receiving heavy inflows from upper catchment areas in view of heavy rains and warning signal two was issued at Sir Arthur Cotton Barrage in Dowleswaram of Andhra Pradesh.

The flood situation in the river Godavari is grim as the water levels is rising.
The water level in Dowleswaram barrage stood at 15 feet and about 14.70 lakh cusecs of water were being discharged into the sea by lifting all the crest gates.

Meanwhile, several villages in Eyenavalli, Edurubede, and P Gannavaram in the Konaseema district were surrounded by the Godavari flood water.
Several causeways were submerged in the flood water disrupting road connectivity to various villages including K Yenugupalli Lanka, Shivayalana, Pucchayakalalanka, and Manepalipalem.

The villagers were using country-made boats to come out of the villages.
The villagers in Chintoor village in Alluri Sitharama Raju district protested by standing in knee-deep flood water against the indifference of officials in providing essential commodities to them.

The farmers told the media that since their villages were surrounded by Godavari flood water they were forced to go pillar to post to get fodder to feed their cattle.

Several island villages in Achanta and Yelamanchili Mandal were marooned by the floodwaters of river Godavari in the West Godavari district.

The NDRF and SDRF teams were deployed to the flood-affected mandals to carry out relief operations.

It may be mentioned here that the heavy flood to the river Godavari created havoc for about 10 days last month.

The flood victims who stayed in the relief camps left for their villages only a few days back and the officials asked them to leave their villages for safer places again.

Meanwhile, the river Krishna is also in spate due to heavy inflows from the upper catchment areas.

AP Disaster Management Managing Director BR Ambedkar said that at the Srisailam project across the river Krishna in Kurnool district, 3.77 lakh cusecs of water were being released to the downstream Nagarjuna Sagar project by lifting 10 crest gates to a height of 15 feet.

He said the warning signal would be issued at Prakasam barrage in the evening.

The Srisalam project was receiving 5 lakh cusecs of water. At Prakasam barrage here, 70 crest gates were lifted to release 4.10 lakh cusecs of water downstream into the sea.No flood-related incidents have been reported from anywhere so far, officials said.

The officials have been put on high alert in Krishna, Eluru, West Godavari, Konaseema, and Alluri Sitharama Raju district as the flood water in rivers Godavari and Krishna is likely to rise heavily by midnight today.