However, police said an investigation has been launched based on the complaint and some evidence was collected. 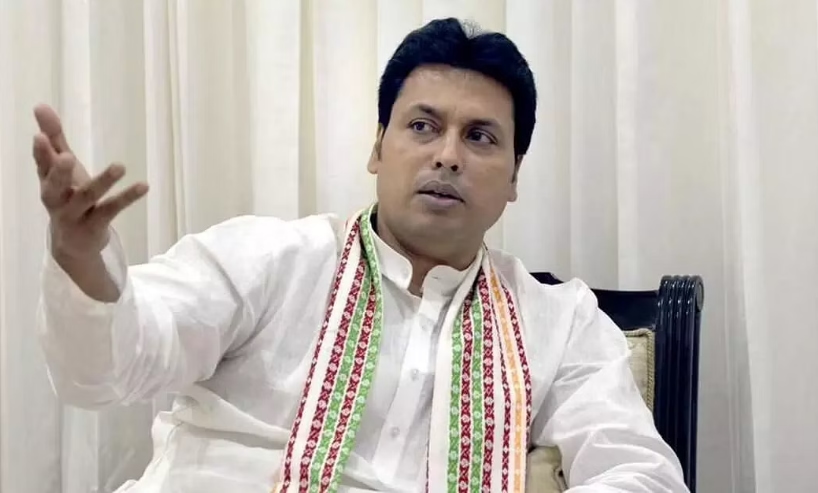 Agartala: An advocate registered a complaint with police against former Chief Minister of Tripura Biplab Kumar Deb for illegally erecting a campaign flex displaying his photograph with Prime Minister Narendra Modi without any declaration in the Banamalipur area of the city.

Advocate Bhaskar Debbarma of the high court of Tripura lodged an FIR in East Agartala police station complaining that Deb put up a large number of flexes in several places of Banamalipur with pictures of himself and Prime Minister Narendra Modi inscribed Azadi ka Amrit Mahotsav without mentioning the printers and publishers.

However, police said an investigation has been launched based on the complaint and some evidence was collected. In course of an investigation if required Deb will be called for his statement and in due time the matter will be placed before the court for taking decision.

“Any political leader can go for propaganda but in flexes, hoardings, and signboards the name of the printer and where from they have been printed need to be mentioned as per provisions of law. Surprisingly, Deb hanged a huge number of flexes violating all formalities using the photograph of Prime Minister and Agartala Municipal Corporation gave no permission to Biplab Deb to go for such a campaign,” Debbarma stated.

But the flexes put up in Banamalipur do not mention the name of the printer and the place of printing. This is a grossly illegal act but putting the picture of the Prime Minister behind the former chief minister the premier’s dignity has been undermined, alleged Debbarma questioning the source of expenditure of such a personal campaign.

He mentioned during the Chief Ministership of Biplab Kumar Deb not less than 500 innocent people including lawyers, doctors, engineers, civil society members, and media personnel had been implicated with false cases for opposing some decisions of the government or criticizing the administration on social media.

A large number of sedition cases were registered against the people who had criticized Deb or his government despite repeated warnings from the Supreme Court. Sitting in the chair of Chief Minister Deb misused police and administration without any jurisdiction and openly criticized the courts and judges and still, he is not caring about the law of the land, which is unbecoming from a public representative, Debbarma stated.

Meanwhile, BJP sources alleged that Deb after being removed from the post of Chief Minister in May this year has been running a parallel administration challenging the incumbent Chief Minister Dr Manik Saha.

Allegedly, he has been pressing the government officers to provide amenities including security expenses, and vehicles, and seeking privileges like Chief Minister. Also, without the permission from party President Deb has been moving across the state and organizing party activities.

“Biplab Deb is calling the leaders of the state regularly indicating his supremacy referring to Home Minister Amit Shah. The message passed on across the party frontal organizations and Mandals that Deb is the final authority of BJP in Tripura where Chief Minister or other leaders would have no role even in the distribution of tickets in coming assembly elections barely after six months,” said a senior party functionary wished to withhold his identity.

He pointed out, “Instead of consolidating fight against the opposition BJP leaders, ministers and MLAs are in a fight among themselves to pull down each other and there has been a conspiracy hatched against CM Dr Saha by a vested interest group, which is further strengthening anti-BJP forces. The detailed report has been sent to BJP headquarters and our national president J P Nadda is scheduled to come on a two-day visit at the end of the month.”