Taking a dig at the Centre over the suspension of MPs from the Rajya Sabha, Gehlot said, "As per my knowledge, during Congress tenure, no one was suspended." 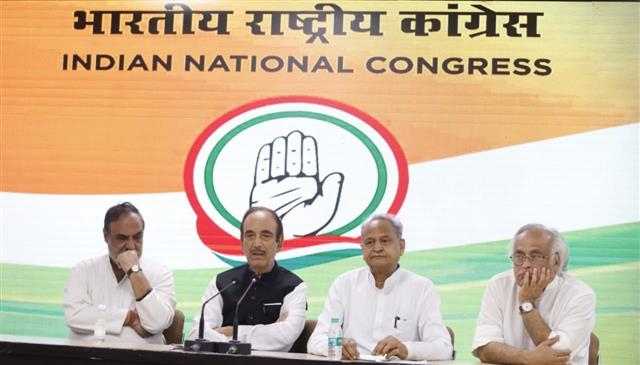 New Delhi: The Congress on Wednesday accused the Enforcement Directorate (ED) of working at the behest of the Narendra Modi-led government at the Centre, and said the central probe agency has “unleashed terror” across the country.

“ED is doing ‘tamasha’ as it is working under pressure from the top level. It is working at the behest of the Centre. There is the terror of ED across the country,” Rajasthan Chief Minister and senior Congress leader Ashok Gehlot said at a press conference at the party headquarters here.

His statements came ahead of the questioning of party president Sonia Gandhi by the ED in the National Herald case and just an hour ahead of a Supreme Court ruling validating the ED actions in PMLA cases.

“ED has got more power than CBI. Now, they can arrest anyone. In such a situation, I urge the Supreme Court to take a decision in this case (National Herald) at the earliest.”Attacking the ruling BJP, Gehlot said, “The ‘fear’ that is prevailing is not in the interest of the country.”

Taking a dig at the Centre over the suspension of MPs from the Rajya Sabha, Gehlot said, “As per my knowledge, during Congress tenure, no one was suspended.”

Endorsing Gehlot, senior Congress leader Ghulam Nabi Azad in an apparent reference to ED, said, “You have papers. You questioned Rahul Gandhi for five days. What was the need to question an old lady? She is not well.”
“From time to time, our colleagues expressed concern about the matter (National Herald case). In politics, we are only opponents, not enemies,” he said.

Echoing a similar sentiment, Congress leader Anand Sharma said, “The facts have been in the public domain. It is not something that is unknown.”
“In the democracy, we can be ideological opponents. It should not be treated as personal. No ‘democracy’ can survive without a strong Opposition,” he said.

New Delhi: The Supreme Court on Friday rejected a plea seeking a direction to disclose the details under the...
World