Attacking the ruling BJP, Gehlot said, "The 'fear' that is prevailing is not in the interest of the country." 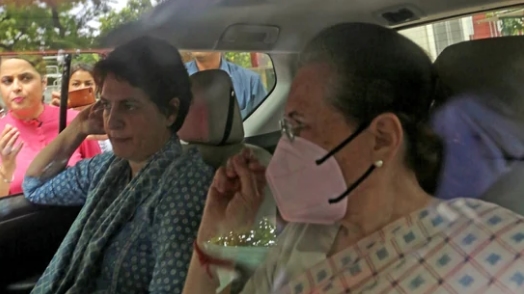 New Delhi: Congress president Sonia Gandhi was grilled by Enforcement Directorate (ED) on Wednesday for over three hours on day three in the National Herald case.

On the first day on July 21, she was questioned for three hours, then Tuesday for over six hours.

Congress Members of Parliament staged a protest in Parliament to show solidarity with their party president who appeared before the probe agency third time in the National Herald case.

Congress MPs were detained by Delhi Police on Wednesday while they were marched from Vijay Chowk to the President’s House to protest against the ED’s quizzing of Congress leader and suspension of MPs from Parliament.

“ED is doing ‘tamasha’ as it is working under pressure from the top level. It is working at the behest of the Centre. There is the terror of ED across the country,” Rajasthan Chief Minister and senior Congress leader Ashok Gehlot said at a press conference at the party headquarters here.

Attacking the ruling BJP, Gehlot said, “The ‘fear’ that is prevailing is not in the interest of the country.”

Endorsing Gehlot, senior Congress leader Ghulam Nabi Azad in an apparent reference to ED, said, “You have papers. You questioned Rahul Gandhi for five days. What was the need to question an old lady? She is not well.”