The value of the vote of an MLA and an MP is different in the Presidential election. 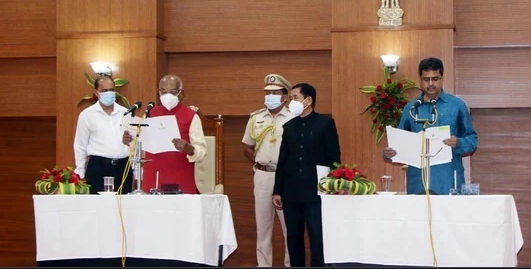 Agartala: Barring Tripura Chief Minister Dr. Manik Saha, three newly elected MLAs – two from the BJP and one from the Congress – were administered the oath of office as legislators by the Assembly Speaker Ratan Chakraborty here on Tuesday.

The Speaker said “Due to some technical reasons, the Chief Minister didn’t take the oath today. But he can be administered the oath of office as an MLA any day in the next six months. Since Dr. Saha is a member Of the Rajya Sabha, he has to decide which post he wishes to retain within 14 days of his election. Till now no decision has been communicated to us.”

He pointed out that before the upcoming Presidential election, Saha – who won the by-poll from Bardowali last week – has to spell out his stand, and accordingly his vote would be counted. The value of the vote of an MLA and an MP is different in the Presidential election.

However, two newly elected BJP lawmakers – Malina Debnath from Jubarajnagar and Swapna Das from Surma constituencies – took oath along with the Congress winner from Agartala constituency Sudip Roybarman.
The four including the Chief Minister were elected in by-polls held on June 23. The results were declared on June 26.